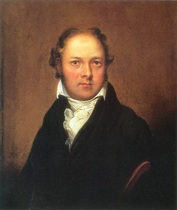 Thomas Weaver (1803)
The decades around the end of the eighteenth century saw the appearance of some astonishing new farm animals. Novel breeding methods, driven by a demand for fatter animals to feed a growing population, generated cattle, sheep and pigs with shapes that had never been seen before. Such prize and pedigree animals demanded portrayal, to advertise their improbable but true dimensions to farmers, breeders and butchers and to satisfy the curiosity of an incredulous public. Artists were needed who could combine art, artistry and artifice to capture their outstanding features with style, impact and verisimilitude. Thomas Weaver was one such painter whose career took him from jobbing artist of farm animals on the Welsh border to painter of pedigree thoroughbreds for the landed aristocracy. 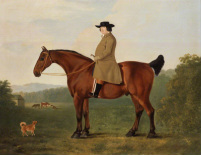 Robert Bakewell by John Boultbee
Born in a small Shropshire village, Thomas grew up among country folk and displayed artistic ability as a child. Aged seventeen he was apprenticed for £150 to John Boultbee of Leicestershire (a pupil of George Stubbs), whose home and studio were close to the model farm of the famous animal breeder, Robert Bakewell, at Dishley Grange, ‘to learn the art of drawing, designing and painting’. He mastered the 'laying on of paint', how to portray animals and the niceties of livestock breeding. He copied his teacher's pictures and travelled with him on commissions. 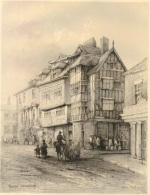 Mardol, Shrewsbury
Completing his pupilage in 1797, Thomas established himself in Mardol in Shrewsbury as a competent artist doing portraits for the local gentry and aristocracy. Through his connections with Boultbee and Bakewell he obtained the patronage of some of the foremost landowners of England, including Thomas Coke (of Holkham Hall), the Duke of Bedford (of Woburn Abbey), the Earl of Bradford (of Weston Park), the Earl Talbot (of Ingestre), the Earl of Lichfield (of Shugborough), the Earl of Chesterfield (at Bradby), the Duke of Rutland (of Belvoir) and Sir George Harpur-Crewe (of Calke Abbey), whose prize bulls, oxen, sheep and racehorses, he portrayed in oils. 'He would visit their seats, remain for weeks at a time, and paint their portraits, family groups, favourite animals and at times restore the works of other painters.’ 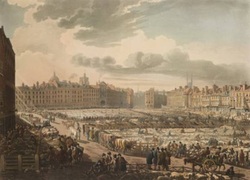 Smithfield Market (1808)
Commissions to paint pictures also took him to London where he did prize bulls at the Smithfield Show, and north to County Durham, where he enjoyed a lucrative relationship with the Colling Brothers, breeders of Comet, the most expensive bull of its age, and other prize bulls and oxen which became mascots of the new agriculture. He also painted many equestrian portraits, of favourite mares, hunters, ponies and hounds for the fox-hunting fraternity in Leicestershire, Warwickshire, Cheshire and Herefordshire, and sheep for breeders and farmers in the Midlands and East Anglia. 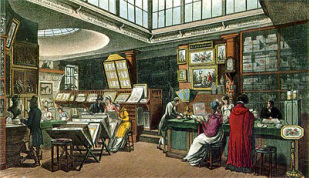 Rudolf Ackermann's Repository of Art (1808)
Several of his paintings were turned into prints by William Ward, engraver to the Prince of Wales, whose studio in London served many notable artists. These included George Morland, whose rural scenes became well-known through the mezzotint skills of Ward, and his brother James, himself an animal artist of distinction. Thomas’s association with the Wards, their artistic patrons and a loyal circle of landed families across the Midlands (many connected by marriage and shared interests in hunting and animal breeding), gave him employment during the boom years of the French wars. 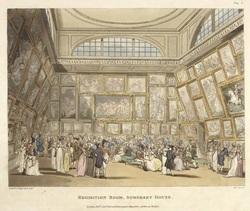 Royal Academy Exhibition (1808)
Weaver prospered, his professional life expanded and his social position rose with his marriage in 1811 to Susannah Pyefinch, the daughter of a country parson. He established a studio in Shrewsbury, where he painted pictures of local people, as well as farm animals and a growing number of equestrian portraits and hunting scenes. He exhibited at the Royal Academy in London in 1801, 1808 and 1809, and the Liverpool Academy in 1814 and 1822, and by the eighteen-twenties he had become a figure of some note in Shropshire; he had a growing family, two boys at Shrewsbury School, was a burgess of the city and moved comfortably within the business, literary and sporting worlds, with many friend among the medical, legal and clerical professions. 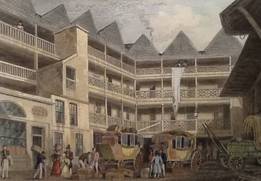 Bull and Mouth Inn, St Matins le Grand
The years after the Battle of Waterloo saw a downturn in the agricultural economy, and with it a declining demand for animal portraits, but Weaver continued to travel widely, making his name as one of a handful of versatile and sought-after animal artists. He produced portraits at a rate of a dozen or more a year until the early eighteen-thirties when he slowed down, worn out by travelling and rheumatism. Painting became impossible and facing destitution he appealed to old friends, colleagues and patrons who, led by the Earl of Powis and Earl Spencer, raised more than £300 to support him, his wife and seven children. 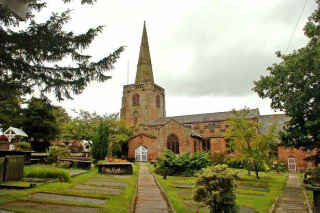 All Saints Church, Childwall, Lancashire
Moving to Liverpool, on account of the employment opportunities the booming city offered his boys, the Weavers settled on its outskirts, where they survived on Weaver’s and his mother-in-law’s pensions, and the incomes of the children. The oldest son John (who assisted his father in his studio) was now a drawing master, the second a doctor and the third an apprentice in the post office. In the early eighteen-forties Thomas and Susannah moved to Much Woolton, some ten miles east of Liverpool, where Weaver spent his last days, dying in the winter of 1844. He was buried at All Saints Church, Childwall, where a memorial to him can be found in the chancel.