Thomas Weaver (1775-1844) was one of a small group of animal artists who painted farm and sporting animals during the agricultural revolution. He made his living doing portraits in oil (some of which were turned into prints) for the local gentry around Shrewsbury where he had his studio. He also travelled further afield to do pictures for livestock breeders and large landowners who were pioneers of new farm animal breeds, and sportsmen who wished to immortalise their favourite hunters and pedigree racehorses. 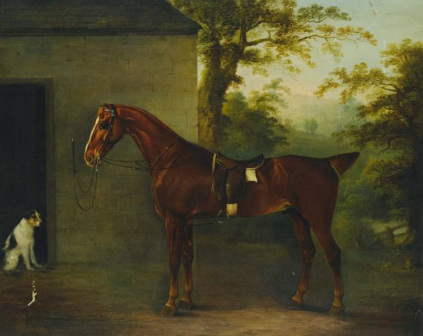 Henry Yarburgh's Hunter Little John (1799)
As an apprentice to John Boultbee, Weaver learned to paint animals by copying his master's work, and Henry Yarburgh's hunter could be mistaken for a painting by his teacher. The horse is static, trim, saddled and ready to go. The terrier suggests its size and the horse is portrayed carefully to be recognisable as Captain Yarburgh's hunter. The Yarburgh's lived at Heslington Hall in Yorkshire and Henry was a keen huntsman. This is one of Weaver's earliest works and is typical of many equestrian portraits he was to do (and Boultbee had done) during his career, representing the bread-and-butter of an animal artist's work akin to the photo-portrait of the field-sport photographer of the present day. Weaver charged 5 guineas for one animal and 10 guineas for two. 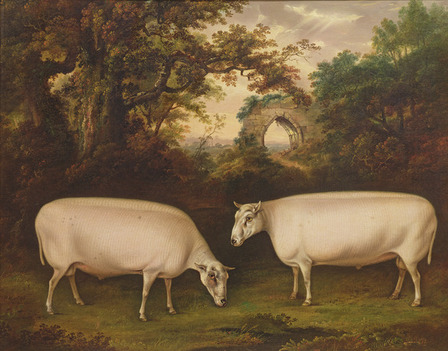 Two Prize New Leicesters (1800)
New Leicester sheep were the product of Robert Bakewell's in-and-in breeding method, and became very popular in the Midlands, where there was a growing appetite for mutton. 'The main consumers, the miner, the wool-comber and the nailer showed a marked preference for fatty to lean meat’ loving what came to be known as ‘coal-heaver’s mutton.’ George Culley, one of Bakewell's pupils, described the ‘fine lively eyes, clean head, straight broad back, the barrel-like form of the body and fine small bones’ of the New Leicester, which set it apart from other longwool breeds. Pleasing to the eye it was its taste that mattered, and this picture is as much promotional as pictorial. Weaver was to do many portraits of sheep, bringing them to life, with doleful expressions and stylish surroundings. 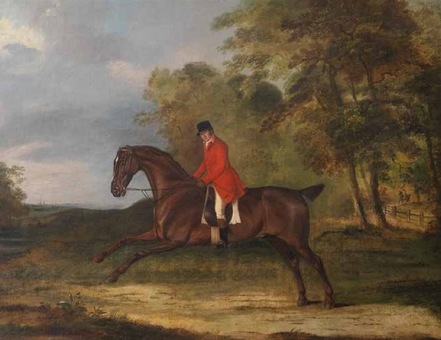 Gentleman on Hunter (1802)
Farm livestock were best portrayed to show off their most potent and meatiest parts, while horses looked best standing in profile. The depiction of horses in motion was tricky and this gentleman on his hunter might have been sketched on a child's rocking horse. With the cropped ears and docked tail of the time, horse and rider are situated in a forest clearing south-east of Lichfield, signified by the three spires of its cathedral on the distant horizon. Weaver achieves all the essential components of a successful animal portrait - well balanced composition of horse and rider, set against the greens of the woodland and marbled blue sky, framed by the delicate foliage and sculpted leaves. The small horsemen arriving to join them add detail, depth and perspective. 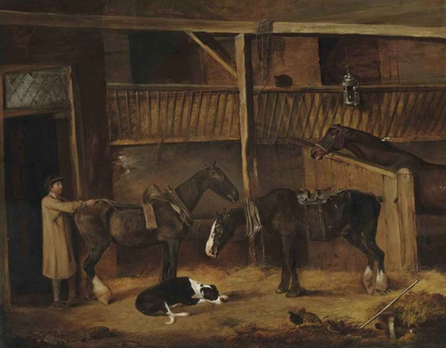 Coach Horses (1805)
Weaver experimented with his depiction of horses and this rural-domestic scene of an ostler removing the harness of a rather scrawny horse, while another waits for its collar and saddle to be taken off, is reminiscent of the homely paintings of his contemporary George Morland, the brother-in-law of his engraver William Ward. The scene is enlivened by the collie dog, tail twitching and eye half closed, watching a couple of hens pecking about for grains amongst the straw. A black cat sits safely surveying the scene from the hayloft above. 'This is a young artist of considerable eminence, particularly in the animal way', wrote one of Weaver's former customers in a letter of introduction to a London art dealer in 1805.  Weaver's talents were recognised and soon he would be painting portraits for the landed gentry. 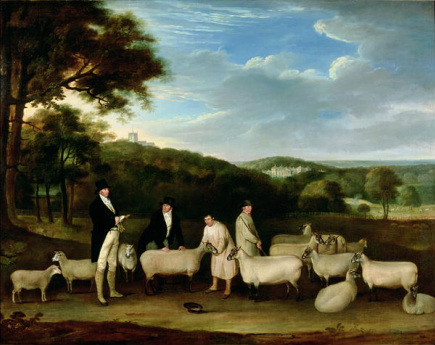 Thomas Coke and his Southdown Sheep (1807)
This was Weaver's first large 'conversation piece', showing Thomas Coke inspecting his Southdown sheep on his Norfolk estate. Southdowns were another popular breed noted for their hardiness and high meat to total weight ratio. Coke's steward, Mr Walton, and his shepherds, Mr Leonard and his son, watch as Coke makes notes about the animals, and in the distance the North Sea can be seen beyond Holkham Hall. Weaver stayed at Holkham in 1806 and 1807 doing portraits for Coke and some of his local tenants. Coke was MP for Norfolk and promoted the farming interest in the House of Commons and this painting represents him as the 'great patron of agriculture.' Weaver charged Coke 63 guineas for the painting, and bore the cost of an engraving (by William Ward), recording in his diary that he 'cleared after paying all expenses of publication £500.' 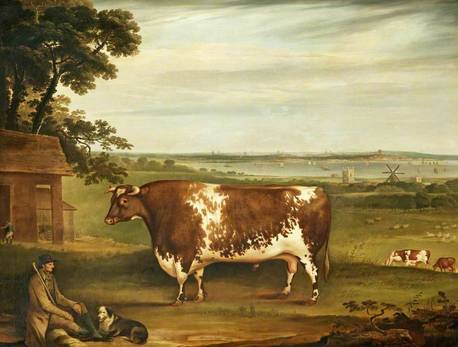 The Bull Patriot (1809)
Learning the craft of farm animal portraiture as an apprentice to Boultbee in Loughborough, close to Robert Bakewell's model farm at Dishley Grange, Weaver became proficient at painting cattle as well as sheep. Copying his teacher's portrait of the Durham Ox (1802), the famous progenitor of the Durham Shorthorns, Weaver did several portraits for the Colling brothers and other cattle breeders. The bull Patriot stands on high ground above Barton-on-Humber on Hill Farm, co-owned by Thomas Marris, a banker, gentleman farmer and secretary of the Lindsey Agricultural Society. The great mass of the bull is accentuated by the seated cowman and his dog, and an engraving of the picture was done to promote the Society's association with this popular breed. 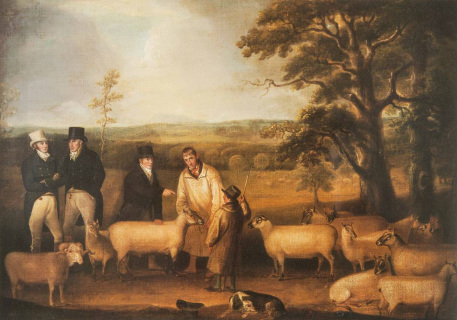 George Tollet and Orlando Bridgeman inspecting Southdowns (1812)
Southdown sheep, popularised by Thomas Coke, were smaller and leaner than New Leicesters. They spread to the Midlands where Orlando Bridgeman, Earl of Bradford, kept them at Weston Park. Here Weaver depicts the earl and George Tollet, an agriculturalist with ‘singular, ingenious and useful farmyard, buildings and water wheel’, inspecting prize specimens and displaying his membership of ‘the agricultural fraternity - something like freemasonry – we are all brethren’, as he confided to Coke. Weaver's conversation piece, portraying pedigree animals with pedigree people at Weston Park, was done the same year as William Constable did a portrait of Bradford’s younger brother, George, to hang in its library. 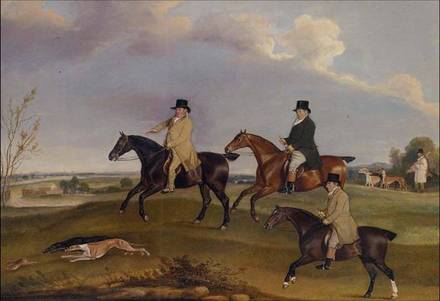 Three Stout Yeomen Coursing on Ponies (1818)
Horses became an increasing popular genre and source of income for Weaver, but he had trouble matching their proportions with those of their riders. This portrait of Mr Jeremiah Whitehead, Mr Yates and Mr Cawlishaw out hare-coursing appears to be made up of cutouts of a collection of toys. Nevertheless it has a naive charm, conveying the serious pleasure and successful sport these three gentlemen farmers are having, dressed up in their finest hunting outfits. Judging from their surnames the landscape across which they sedately career was Lancashire, where Weaver obtained several commissions before moving to Birkenhead and then Liverpool in the eighteen thirties with his growing family. 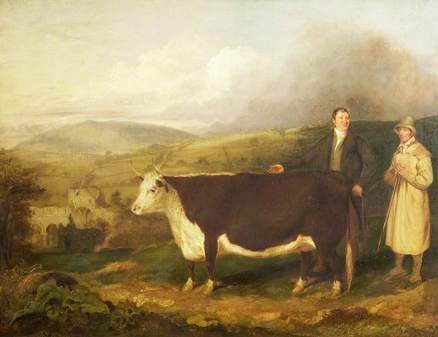 Mr Stanier, his Herdsman and a Hereford Heifer near Buildwas Abbey and a Distant View of the Wrekin (1820)
Hereford cattle were hardier, stockier and shaggier than Durham shorthorns, they fattened quickly and were exceptionally docile. Weaver had portrayed a number of prize animals, including Silver, progenitor of a pedigree of the 'great Hereford breeder' Mr Benjamin Tomkins, and the bull Trojan, belonging to Sir Charles Morgan of Tredegar. Herefords were becoming popular in Shropshire and Weaver depicts Mr Charles Stanier of Leaton and his herdsman, displaying a fine specimen in the Severn valley above the ruins of Buildwas Abbey, no more than a couple of miles from the Iron Bridge in Coalbrookdale. The agricultural and industrial revolutions were progressing hand in hand and side by side. The Wrekin, a landmark that features often in Weaver's pictures, can be seen in the distance. 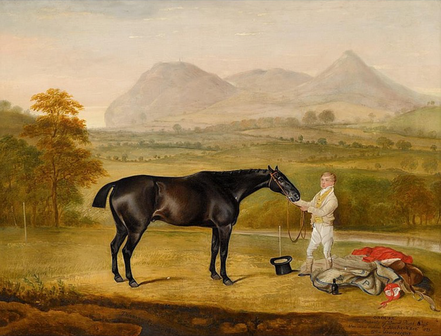 'Grouse' the Property of David Pugh Esqr (1823)
With the agricultural downturn following the end of the French wars, commissions for farm animal portraits declined and Weaver turned to race horses, such as Grouse, the winner of the Union Stakes at Welshpool in 1823. The wealth of its owner, David Pugh Esqr, High Sheriff of Montgomeryshire, was founded on the tea trade, and having rebuilt Llanerchydol Hall in the Gothic style, he employed John Repton to landscape the parkland, and Thomas Weaver to adorn the interior with a portrait of his favourite stallion. After securing the prize of 190 sovereigns in two matches of John Beck Esqr, the jockey, with saddle, monogrammed blanket, racing colours and bottle to celebrate his wins, stands before the serpentine lake with a view of Pugh's estate of 2000 acres and the Breidden Hills beyond. 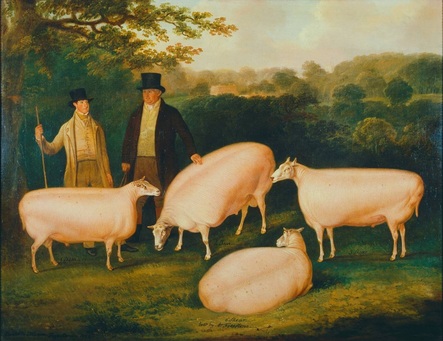 Mr Freestone, his Shepherd and Four Prize New Leicester Rams (1824)
New Leicester sheep proved to be enduringly popular and proficient producers of meat. The 'celebrated breeder of tups', Mr John Freestone of Great Harrowden near Wellingborough, stands proudly alongside his smartly-dressed shepherd, with four prize rams - 2 shear, 3 shear, 4 shear and 6 shear - indicating how their potency was preserved year on year. With one of the 'best flocks in the kingdom' Mr Freestone exhibited his sheep at the Northamptonshire Farming and Grazing Society at Lord Althorps, and in 1831 he won the William IV Medal for the best long-wooled sheep at the Smithfield Club Christmas show in London. Who best to portray these specimens of 'Britain's foremost mutton-producing breed' than Thomas Weaver, who had known Robert Bakewell himself. 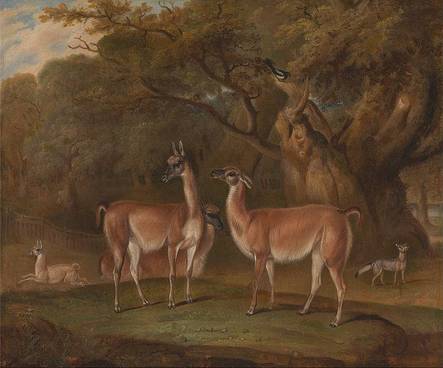 Llamas (1828)
Lord Talbot imported two llamas in 1825, which bred at Ingestre. They were shorn once or twice, and their 'hair being fabricated into cloth was of the finest texture possible’. They were gentle natured creatures, depicted by Weaver frolicking playfully, watched by a wary fox, who eyes a watchful magpie in a branch above. But these South American animals proved neither resilient ornaments for front parks, nor economic sources of wool for market. Talbot presented his flock of llamas to the Zoological Society. Sir Humphry Davy, Sir Joseph Banks and others had promoted the idea that an establishment in London, like the Jardin des Plantes in Paris, was needed that would house a zoological collection ‘which should interest and amuse the public, and create a collection of animals for study at leizure’. 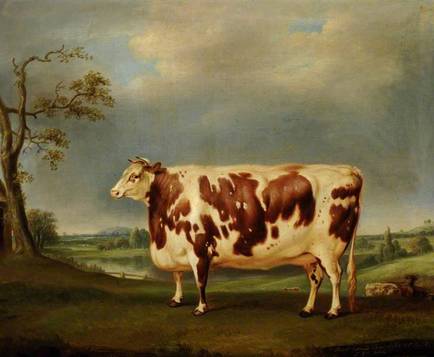 Brindled Beauty (1831)
Weaver did portraits of many prize cattle and, on account of the promotional value of his paintings and prints, he became known amongst their breeders as a 'staunch friend to the shorthorns'. Brindled Beauty was a fine specimen and a favourite cow of the eccentric Sir Crewe of Calke Abbey. Weaver did at least a dozen paintings for Sir George. This grand cow is a fine example of the words of one critic of his work who said: 'All the animals painted by Weaver have marvellous wit and character, illustrated by the most expressive glance, stance and posture – a wicked look, a bored stance or pure disdain.' Thirty years of painting portraits of more than 400 farm animals and horses prompted another critic to describe Weaver as 'possibly the greatest [animal] artist of the age of the English Agricultural Revolution'. 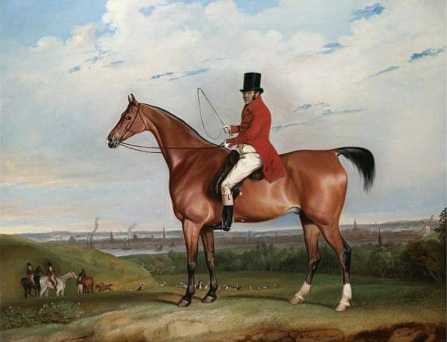 William Aspinal and the Cheshire Foxhounds (1833)
Weaver had moved to Birkhamsted, on the south side of the River Mersey, opposite Liverpool, by 1833. The skyline of the city can be seen beneath the horse - sailing ships are giving way to steam and windmills are eclipsed by factory chimneys. The city was growing rapidly, connected to Manchester by the new railway, and William Bolton Aspinal, a shipping merchant and chandler, sits astride his hunter enjoying the country pursuits (and fine portrait) that his prosperous position brought him. He won a wager of half crown for jumping the Poulton Brook and 'a very handsome, solid silver hunting-flask' for this fearless achievement. Note the change of style, background and confidence of this painting compared with Corbet and his Warwickshire Foxhounds done twenty years earlier.