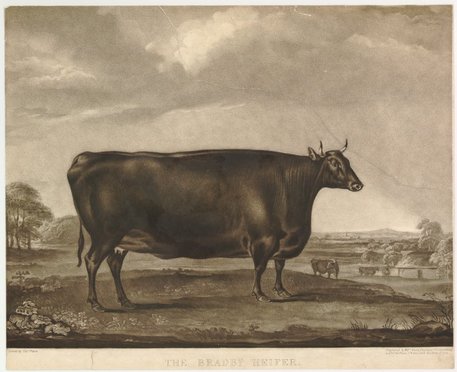 The Bradby Heifer, of the Devon and Alderney cross was calved in June 1806, and slaughtered on 15 December 1810. She was bred & fed on the Earl of Chesterfield’s farm at Bradby, in the county of Derby. Measurements when alive: Height at the shoulder 4’ 6”, Length from the nose to the setting on of the tail 10’ 0”, Girth behind the shoulders 9’ 0”, Girth of the leg below the knee 0’ 7”. Weights when slaughtered: Weight of carcass 1040 lbs, Ditto of loose fat 175 lbs, Ditto of hide and horns 75 lbs. 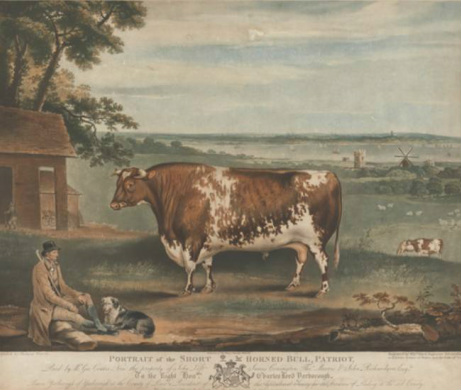 Portrait of the Short Horned Bull, Patriot, bred by Mr Geo. Coates – now the property of John Loft, James Conington, Thos. Marris and John Richardson Esqrs. To the Right Hon. Charles Lord Yarborough, Baron Yarborough of Yarborough in the county of Lincoln, President of the Agricultural Society for the Division of Lindsey, in the said county. This plate is respectfully inscribed by His Lordship’s much obliged and obedt. servt. Thos. Weaver.

Portrait of John Cotes Esqr. M.P. for the county of Salop, to the members of the Shiffnal Agricultural Society this print is humbly dedicated, by their very obliged & obedient servt. Thomas Weaver. 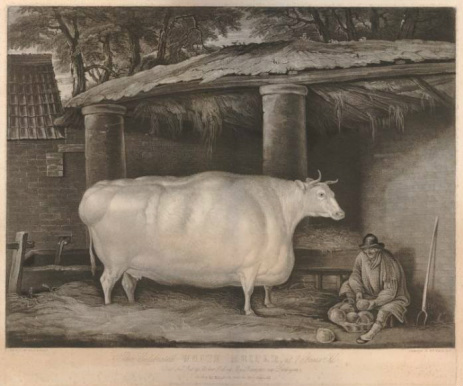 
A Shorthorned Heifer, 7 years old. Bred & fed by Mr Robert Colling of Barmpton, near Darlington, in the county of Durham, to whom this print is respectfully inscribed by his obedient servant Wm Robins. Painted by Thomas Weaver. Engraved by Wllm. Ward, engraver extraordinary to their R.H. the Prince Regent & Duke of York. 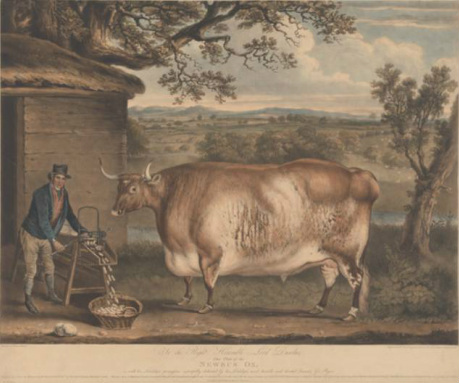 To the Right Honorable Lord Dunders, this plate of the Newbus Ox, is with his lordship’s permission respectively dedicated, by his Lordship’s most humble and devoted servant Geo. Byres. The ox was bred by William Hutchison Esqr of Egleston, near Barnard Castle. He was out of a Highland Scotch cow, which when fat and slaughtered weighed only 24 stone 10 lbs: His sire was grandson of Old Favourite, belonging to Charles Colling Esqr of Ketton, and was fed by Thomas Wilkinson Esqr of Newbus Grange, nr Darlington, in the County of Durham. Painted by Thomas Weaver. Engraved by Wm. Ward Engraver to their R.H. the Prince Regent & Duke of York. 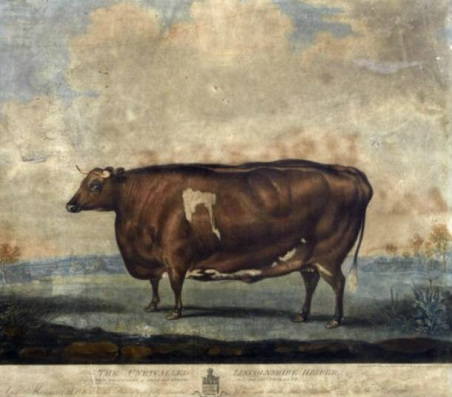 The Unrivalled Lincolnshire Heifer, fed by Thos Willoughby of Orby, near Burgh; and now his property. To Genl. Manners M.P. etc etc etc this plate is respectively Inscribed by his most obliged Servant, Thos. Willoughby. Painted by Thos. Weaver. Engraved by Wm. Ward Engraver to their R.H. the Prince Regent and the Duke of York. 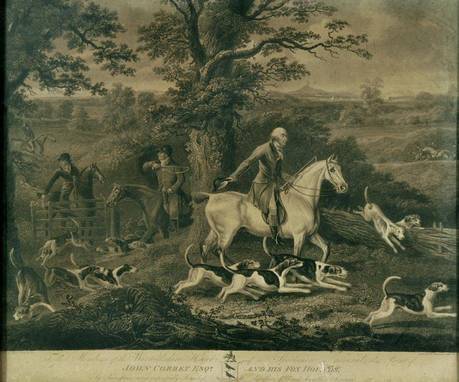 To the members of the Warwickshire Hunt and to sportsmen in general this print of John Corbet Esq and his favourite foxhounds is by permission respectfully inscribed by their obliged humble servant Thomas Weaver. 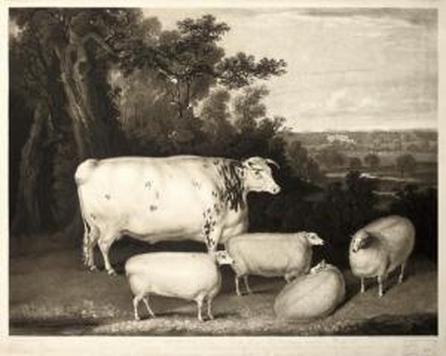 Engraved by William Ward, published by Charles Champion of Blyth. Mezzotint. 29 x 23 in.

Bred & fed by Mr Champion of Blyth, Notts. & exhibited by him at the London Christmas Cattle Show, Sadlers Yard, Decr. 1817. To his Grace the Duke of Bedford, this print, is by permission, most respectfully inscribed by His Grace’s very obliged servant, Charles Champion. Dead weight of the Durham steer, 236 st. 7 lbs, 8lbs to the stone London weight. The dead weights of the four sheep, 94 st. 7½ lbs. Print engraved by William Ward, ARA. Engraver to their R. H. the Prince Regent & the Duke of York. 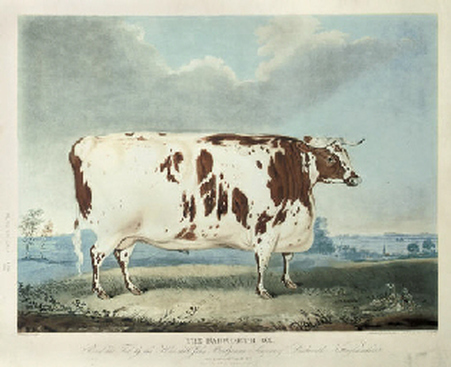 Engraved by William Ward, published by John Bingley of Blyth. Mezzotint 24 x 18 in.

The Babworth ox, bred and Fed by the Hon. John Bridgeman Simpson, of Babworth, Nottinghamshire, was 4 years old August 1817. 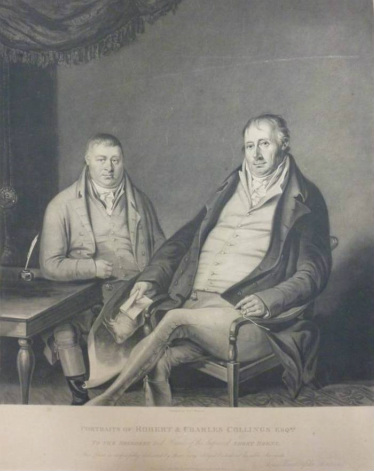 Portraits of Robert and Charles Collings (sic) Esqrs. To the breeders and friends of the improved short horns, this print is respectfully dedicated by their very obliged and humble servants Thos. Weaver and John Thompson. 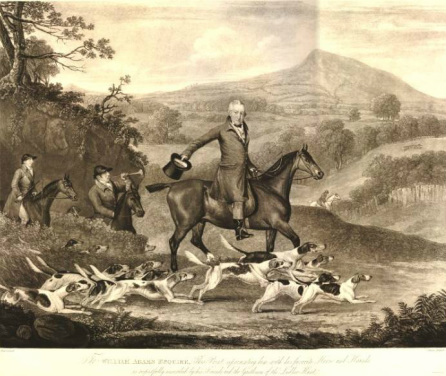 To William Adams and his hounds. This Print representing him with his favourite horse and hounds is respectfully inscribed to his friends and the gentlemen of the Ludlow Hunt. 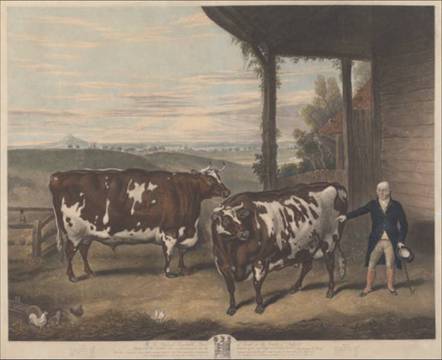 To Sir Clifford Constable Bart. of Tixall in the County of Stafford, this print of two Durham oxen is with permission humbly dedicated by his very obliged and obedient servant, Benjamin A. Bond. The above Oxen were descended from the Stock of Edwd. Blount Esqr. of Bellamore, Rear’d and Fed by Mr John Bond of Brancott, near Stafford and Slaughtered to celebrate the coming of Age of Sir Thomas Aston Clifford Constable Bart on the 3rd of May 1827. Weight of left beast was 2742 lb and the right beast was 2437 lb. 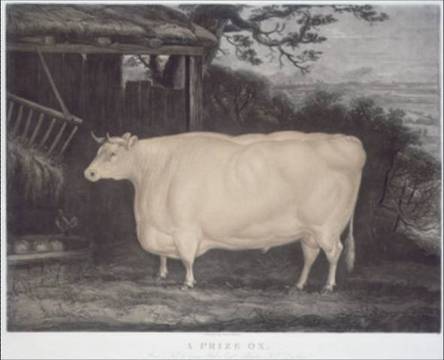 Bred and Fed by George Baker Esq. Ellimore Hall, Durham.
William Davenport of Yelverton, Seated with Two Greyhounds (18??)
Engraved by ?, published by T Weaver, Shrewsbury. Mezzotint 24 x 17 in.
​
The Coates Series of Lithographs (from Boalch 1958)
The Herd Book of Shorthorns began in 1822 under the editorship of George Coates and then his son, until 1842 when it was taken over by Henry Strafford who edited it until 1873. Each volume contained vignette lithographic illustrations of celebrated shorthorn cattle, including four based on pictures by Thomas Weaver.